Carrie Ann has more than a few books in her library—more than fifty in fact! New to her worlds and unsure where to start? Or maybe you’ve read her before but want a certain trope or heat level for your evening read? Well, look down below for our guide on where to begin when you want to fall in love with Carrie Ann’s worlds.

If you’d rather start with a smaller trilogy in the world, go with either Love Restored, Gallagher Brothers Book 1, Whiskey Secrets, Whiskey and Lies Book 1, Breaking Without You, Fractured Connections Book 1 or Breathless With You,  Less Than Book 1

Want to start reading the Packs?

The Talons occur thirty years after the Redwoods end so you do not have to read one before the other. A few of the now-grown Redwood children do end up mating into the Talons so it’s up to you which one you’d like to start–though the Talons are near and dear to my heart at the moment.

And for those of you looking at the Branded Packs series…that’s a completely separate series I wrote with Alexandra Ivy and is not connected to any of the other Packs.

Most of Carrie Ann’s books are spicy and high heat. Though a few are a little milder than the others.

Want a book that will make you reach for the tissues?

Carrie Ann sometimes needs a book that makes her cry because sometimes only weeping will do.

In the mood to relax? 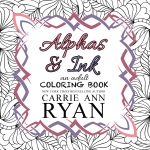 Want to relax and just be instead of reading? Try the Alphas & Ink Coloring Book that features most of Carrie Ann’s series.

In the mood to visit characters for the second time?

Carrie Ann loves visiting old characters to see how they’re doing. She’s written a few novellas that go After the HEA so you can see key events that you might miss otherwise. These include books like: Blurred Expectations, Ink Ever After, Flame and Ink, and Forgiveness.

In the mood for a growly Alpha Hero? Carrie Ann knows how to deliver!

What is the reading order for all of the books in the Montgomery Ink world?

Each book in the Montgomery Ink world is a stand alone romance. In fact, every contemporary novel and novella I’ve ever written is set in the same world where the Montgomerys exist. It’s a fun way for readers to hop along the series and see familiar faces. And it’s a great way for new readers to start wherever they’d like, even four series into the world, and work their way around.

You can find the full reading order for all of the books out and upcoming HERE.

In terms of Montgomery Ink Novels only, without the other contemporary stand alone series:

The Montgomery Ink World so far encompasses a few series, so far, though each book is a stand alone. Below you can see where the trilogies in the world branch off from the main Montgomery Ink family novels.

What is the reading order of your books?

All of my contemporary and paranormal books are stand alones. However, a few are set in the same worlds.

If you’d like to read the Montgomery Ink series in order, it goes: Denver (Original) > Colorado Springs > Boulder > Fort Collins.

The Redwood Pack series is set 30 years before the Talon Pack series.

Every contemporary romance I’ve written is set in the same world, however, each series is stand alone. If you want to read in timeline order, then start with Ink Inspired and work you way in the order they were released. You can check that out on my bookshelf by sorting by Interconnected Series or Release Date.