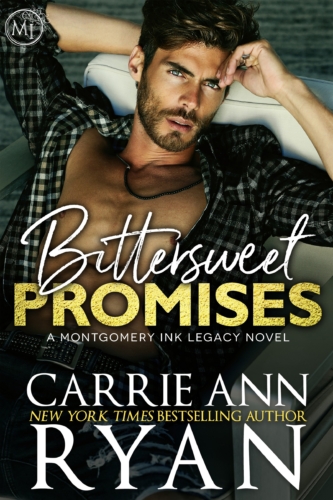 New York Times Bestselling Author Carrie Ann Ryan returns with the next generation of Montgomerys and a second chance romance bound in memory and heat.

Leif Montgomery fell hard for Brooke Alder in Paris when they were young, and he thought their fling was just an early taste of what life had in store for him.

But life had other plans, and he didn’t find that kind of love—or see Brooke’s face—for years.

Until he visits his cousin’s house and sees who’s moved in next door.

They’ve both changed: she’s a struggling single mom, he’s running from a past he’s trying to hide while opening up a new tattoo shop. Yet the moment he sees her again, he knows she’s the one for him.

And with one look, Brooke knows that she can’t fight the desire that pulled them together before, despite the skeletons in both their closets.

Bittersweet Promises is Book 1 in the Montgomery Ink Legacy series 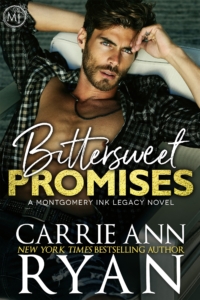 “Not only did you convince me to somehow go on a blind date, it became a double date. How on earth did you work this magic on me, cousin?” I asked Lake as she leaned against the pillar just inside the restaurant.

Lake grinned at me, her dark hair pulled away from her face. She had on this swingy black dress and looked as if she were excited, anxious, nervous, and happy all at the same time. Considering she was bouncing on her toes when usually Lake was calm, cool, and collected, was saying something. “I asked, and you said yes. Because you love me.”

“I might love you because we’re family, but I still think we’re making a mistake.” I shook my head and pulled at my shirt sleeves. Lake had somehow convinced me to wear a button-up shirt tucked into gray pants, I even had on shiny shoes. I looked like a damn banker. But if that’s what Lake wanted, that’s what I would do.

Lake might technically be my cousin, even though we weren’t blood-related, but we were more like brother and sister than any of my other cousins.

I had siblings, as did Lake, but with the generational gap, we were at least a decade older than all of our other cousins. That meant, despite the fact that we had lived over an hour apart for most of our lives, we’d grown up more like siblings.

I loved my three younger siblings and talked to them daily. Unlike some blended families, they were my brothers and sister and not like strangers or distant family members. I didn’t feel a disconnect from the three of them, but Lake was still closer to me.

Probably because we were either heading into our thirties or already there, where most of our other cousins were either just now in their early twenties or still teenagers in high school. With how big we Montgomerys were as a family, it made sense that there would be such a widespread age group. That meant that Lake and I were best friends, cousins, practically siblings, and sometimes the banes of each other’s existences.

We were also business owners and partners and saw each other too often these days. That was probably why she convinced me to go on a blind double date. But she had been out with Zach before. I, however, had never met May. Lake had some connection with her that I wasn’t sure about, and for some reason Lake’s date had said yes to this double date.

And, in the complicated way of family, I had agreed to it. I must have been tired. Or perhaps I’d had too many beers. Because I didn’t do blind dates, and recently, I didn’t do dates at all.

Lake scanned her phone, then looked up at me, all innocence in her smart gaze. “You shouldn’t have told me you wanted to settle down in your old age.”

I narrowed my eyes. “I’m still in my early thirties, jerk. Stop calling me old.” 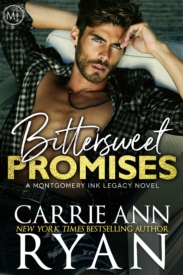