Signup to Get Carrie Ann's News & Updates Via Email →

Delicate Ink is now in French! 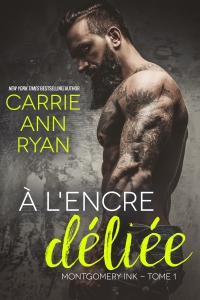 The Montgomery Ink series is going to France! Delicate Ink (Montgomery Ink Book 1) is now translated in French and is now available!

Embraced in Ink has a Cover!

The Montgomery Ink saga continues with an unforgettable romance where two best friends make a bet that could change their lives forever.

Bristol Montgomery and Marcus Stearn have been best friends for so long, they sometimes forget when they weren’t as close as they are now. While friends and family think there’s something beneath the surface of their friendship, the two have always been steadfast in their stance on no heated looks or deeper feelings.

The problem? Years ago, they promised each other that if neither of them was married by the time Bristol turned thirty, they’d marry each other.

Even though both have long since decided never to force the other into an arranged marriage, circumstances and sheer stubbornness force them to refuse to back out of their deal.

Now, they’re determined to get married—even as dangerous exes and feelings they deny, block their path.

The Dante’s Circle series was the second series I ever started and was filled with so many types of paranormals that I couldn’t help but fall in love with each book. And now there are NEW COVERS!

They are slowly populating over on all retailers, including print, eBook, and audio! And you can order from my store as well. I still have a few of my old covers in stock in my store in case you were waiting on those as well.

Preorder Sated in Ink in Audio!

Great news! Sated in Ink (Montgomery Ink: Boulder Book 2) will officially be available in audio along with its eBook and print counterpart on Feb 11th. You can preorder today for a simultaneous release. Yay!

From Spirit and Binding Cover and Blurb Reveal!

The Elements of Five series continues in on July 14th, 2020! From Spirit and Binding (Elements of Five Book 3) is where EVERYTHING changes. And with the ending of From Flame and Ash? Oh, you’re going to want this book ASAP!

In her quest to unlock four of her five elements, Lyric has watched those she loves fade into ash and ruin. Bearing the weight of much loss and heartache, she and her team try to regroup and journey back to the only home Lyric has left—the Obscurité Court.

With the future uncertain, and the one person who could help her control her new powers missing, Lyric has never felt more lost. But as the pieces begin to come together in an epic unveiling she wasn’t prepared for, she’ll have to remember why she was called upon to become the Spirit Priestess in the first place.

The King of Lumière wants revenge for his lost brother, but he also wants so much more. With a missing king, a lost prince, and a few unexpected allies, Lyric will have to battle more than one enemy, and face countless unanswered questions with regards to a prophecy previously lost to the Maisons.

Carrie Ann's newsletter is for big announcements, like book releases, while site news & content updates keeps you up to date with everything going on in the world of Carrie Ann. Sign up for whichever kind of news you want, or both!