Signup to Get Carrie Ann's News & Updates Via Email →

Want to win a print copy of Breathless With Her (A Less Than Novel)? Head on over to Goodreads and enter to win one of three copies!

And don’t forget to preorder in eBook or audio and get a FREE bonus epilogue!

Devin Carr likes his life. He likes his job, his family, the outlook for his future. Then he meets her. Erin. As soon as he sees her, drunk and wearing a sequined dress as her world crashes down around her and she fights to put on a brave face, he knows what he’s been missing. Her.

When Erin Taborn finds her high school sweetheart and husband banging the former head cheerleader of their graduating class at their high school reunion, she tells herself she’ll be fine. She just needs to figure out what fine means. There’s only one problem. Devin. She didn’t plan on him. And for someone who thinks they have all their plans in place, that’s a problem.

One she’ll have to find an answer to if this whole friends-with-benefits thing is going to work.
If not, she’ll fail just like with everything else.

The Montgomerys are waiting! Seduced in Ink (Montgomery Ink: Boulder Book 4) is now up for preorder! You can read this bad boy on Sept 29th, 2020! But don’t worry about the wait, you have more Montgomerys, Elements, and other romances to come before then! Preorder today!

Teaser Tuesday: Breathless With Her

Breathless With Her (A Less Than Novel) releases on Oct 22nd! Here’s a sneak peek of Erin and Devin’s romance! Don’t forget to preorder to get it on release day! Yay!

“I bet you’re one kick-ass aunt, Erin.”
“I hope so. I mean, the kids do adore me. And I try to spoil them, much to Jenn’s chagrin.”
“Sounds like she’s happy.”
“She is. Are you okay with that?”
I chuckled, turning down the street. “I’m just fine. We dated for like a minute if I remember right.”
“Oh, but she was so in love with you.”
“Yeah, teenage love, where it isn’t really love.”
“I used to think teenagers could really love. After all, I thought I loved Nicholas.”
Once again, I wanted to curse, but I held myself back. “I’m not saying all teenage love isn’t real. And you can still have those feelings. Just because he’s an asshole who deserves to be beaten doesn’t mean you didn’t or don’t love him.”
“Yeah, what does that say about me? That I could love someone who can do that to someone else. Am I a doormat?”
I shook my head, then reached out and squeezed her hand. “There’s nothing doormat about you, at least from what I can tell.”
“You’ve known me for like an hour now.”
“I knew you when you were a little kid, just like I knew Nicky. You’re a strong one. You’re going to be just fine, okay?”
“Maybe you’re right. Or maybe I need to forget, just for a minute.”

From Flame and Ash (Elements of Five Book 2) releases Nov 19th! Here’s a taste to get you ready!

We walked for two days straight, only resting for a few hours at a time to sleep, eat, and drink water. It was weird, but the journey felt so much like the time I had moved from the Earth territory to the Fire one. We just kept walking. Nobody in the group spoke much, but Arwin was the quietest of them all. He seemed so sweet, though, always making sure I had enough water and food. And he really seemed to like Braelynn. He held her close, even carrying her in his arms so she could have a better look around. They were all warriors, I knew that, but Arwin seemed almost…innocent.
It seemed weird that there could be innocence in a world where people died all the time because of other people’s greed. But there was goodness in the human world, as well. Sometimes I forgot that.
My legs burned, and I was exhausted and really just wanted a bath, but I knew we were getting close.
When the magic through my body shimmered, I looked down at the Air Wielding humming in my fingers, the earth rumbling beneath my feet.
We were getting close.
Or perhaps we had arrived.

Adam is in French! 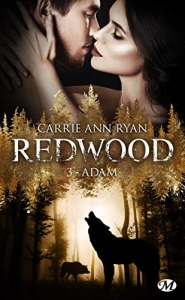 Carrie Ann's's newsletter is for big announcments, like book releases, while site news keeps you up to date with everything going on in the world of Carrie Ann's. Sign up for whichever kind of news you want, or both!

How do I sign up for the Carrie Ann Newsletter?

Easy! Just follow this link, and fill out the form →