Book 1 in the Tattered Royals Series 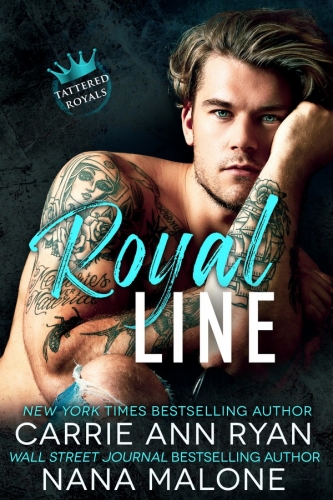 A princess on the run finds her version of a prince in this epic beginning to the Tattered Royals stand-alone series.

I never asked for my tiara.

My dreams were always bigger than a palace. They’re as big as the world. Being fourth in line for the throne should have guaranteed me freedom. I thought I was one step from walking away forever, but a long-forgotten rule forces me to run instead. I refuse to marry a Duke and bear an heir to save our titles. I trust my brothers to find a way to save my future, but first I need to save myself.

Only I never expected to meet danger…and Kannon Adams along the way.

I never asked for her.

My security business has secured all the clueless princess types I can handle. Princess London Waterford of Alden is a whole other level of trouble. Not to mention gorgeous and tempting as royal sin. Too bad she’s also in danger. When the bullets fly, I trust no one else to protect her, even if she pushes me away. Together, we must find who’s behind the threat to her life and try not to get caught in the crossfire.

One night together might never be enough, but if those who want her dead have a say, it’ll be our last.

Royal Line is Book 1 in the Tattered Royals series 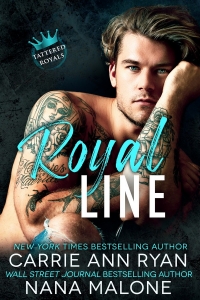 “Why are the three hosts of this party standing in a corner and not socializing?” a deep voice asked from behind me.

I turned, a tentative smile on my face. “Roman.”

“Happy birthday, baby sister,” my brother said as he leaned down and brushed a small kiss on my cheek. He looked every bit the king he was.

It was a breach of proper etiquette, but it was my birthday, and the king did break the rules sometimes. Or perhaps he just bent them to his will with his fierce gaze and that stern frown that was perpetually on his face.

“We’re just deciding which of us is going to start getting wrinkles first,” Breck said.

“Not me. If anything, it’s going to be Roman here. Old man.”

I was the baby sister of four, with Wilder being only a year older than me, and Breck being a couple of years older than that. But Roman had a larger gap in age than the rest of us.

Our parents had loved each other, had a whirlwind romance, and had been amongst the greatest kings and queens of the ages, according to Alden’s history.

When we lost them, the world had mourned.

But before that happened, they’d had four children. Each one brought into the world with love, light, and paparazzi flashes in their eyes.

I wasn’t a fan of the latter and considering what I wanted to be instead of a princess, it made sense.

I was a photographer. Not a princess in my head all the time.

I wanted to find a blend of both, one where I could see through the lens and take pictures of the world and understand human nature and nature itself.

I wanted to do all of that and see the world without having a bodyguard at my side or a royal reason for being there.

Wishes didn’t make choices, and unless I stood up for myself and finally asked, it was never going to happen.

“Come with me,” Roman said, frowning.

I looked at Breck and Wilder, who just shrugged, and we followed the King of Alden out of the room, wondering what on earth he could have to say to us tonight.

“What is it? You were just meeting with the King of Sweden, right? Nothing could have happened there,” Breck said.

“As do I, hence why nothing would happen to occasion this meeting.”

“We have our ways. This trip of yours is going to be too dangerous. I know you want to go and take photos and do something that you’re passionate about, but you can’t. It’s too dangerous considering the times we’re in. I’m sorry. But I forbid it.”

Rage curled in my belly, and I swallowed hard, trying to understand exactly what he had just said.

“I can forbid whatever the hell I want to. I am the King of Alden. I am your king.”

“You are my brother, you might be my king, but you are not my owner and not my father.”

He didn’t wince at the reminder of what we’d lost, but I saw his eyes narrow infinitesimally.

“No, I’m not either of those things, but I am your ruler. You have a job here. You are to act in place of my queen until it is deemed that I find a queen of my own. You have duties here that you are neglecting every time you see fit to leave this kingdom on another jaunt of yours.”

“Really? A jaunt. It’s a job. An actual job. One where I’m not cutting ribbons and smiling for people instead of doing what I want.”

“Then find something that you like to do here. Be someone. Make a contribution. But I can only keep you safe if you’re here.”

Breck and Wilder just stood with their mouths agape, but I was shaking. I couldn’t think. I couldn’t breathe.

Before I could say anything in rebuttal, heels clattered on the marble floor behind us, and I whirled to see Aunt Rebecca running in, her face pale, her hands on her dress, lifting her skirts so she wouldn’t trip.

Aunt Rebecca never ran. She was always poised and in control, her royal majesty in all but name. She would have been an amazing queen if she had not been born second to my father.

“Roman, you must listen.”

“I’m busy. I can’t meet with the council right now. I just got back into the country, and it’s London’s birthday. We’re celebrating.”

“Some celebration,” I mumbled.

“I know you’re busy, but you must listen.” A chill of foreboding slid over my body as I narrowed my eyes at her, the tone of her voice one I hadn’t heard in far too long.

“Listen to what?” I asked carefully.

“London, if you run off and chase your dreams and neglect your duties, you’ll lose your throne. And Roman, you’ll lose everything.” 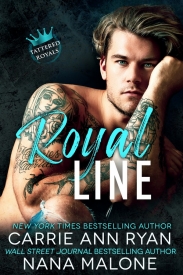