Nothing But Ink - Carrie Ann Ryan 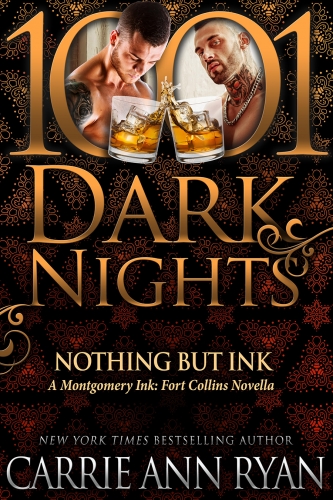 Clay Hollins knows he needs to stay away from Riggs Kennedy. He doesn’t have time to fall for the bearded bartender that haunts his dreams and waking fantasies. Not only is he working long hours at his dream job with Montgomery Builders, but he’s raising his three cousins and they need him more than he needs a private life.

After one night of giving in, however, neither Riggs nor Clay can walk away.

Only their lives are chaotic with baggage from Riggs’ past and Clay’s present and taking a chance on each other might be the scariest yet best decision they ever make.

Nothing But Ink is Book 3.5 in the Montgomery Ink: Fort Collins series

Nothing But Ink Characters Profiles 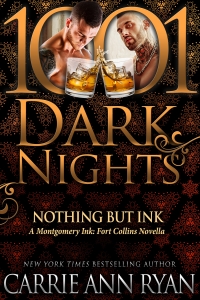 However, I couldn’t focus on them too much. Because I turned and saw the person I wanted to see.

The man I couldn’t keep my eyes off of. The guy that I wasn’t sure the Montgomerys knew I knew as well as I did. After all, I hadn’t always been from Fort Collins. And neither had Clay.

Clay held a small tray of drinks and nearly stumbled as he looked at me.

“You know, I was going to say I should hire you, but if you’re going to drop the drinks, I don’t think you’d last long.”

“You don’t know how long I last, do you?” Clay asked and then blushed as he said it.

The Montgomerys whooped and hollered as I got up and took the tray from him. Our fingers brushed, and I watched the long lines of Clay’s throat work as he swallowed.

“You’re not working here. I am. Let me take care of you.”

“I can take care of myself, Riggs. I always have.”

I shook my head and moved out of the way so Clay could move past me. We handed off the beers and the virgin drinks for the girls, and I gestured to the dance floor.

“What do you say, Clay? Why don’t you finally make me an honest man and give me a dance?”

I had been asking for a dance with Clay for months now. Over a year, if I were honest with myself. And each time, Clay said no because it was too much. Or he had to go home to the kids.

Clay had his own life and responsibilities.

And our tangled past didn’t need to be part of his complicated future. Only after seeing Neil and watching my bar work the way it should—even short-staffed—I just wanted something that had nothing to do with who I used to be, and maybe focus on who I wanted to be with.

“Oh, just say yes,” Eliza said as she sipped her drink. “Give us some entertainment.”

“Am I not entertaining enough?” Beckett asked, his hand over his chest, clearly affronted.

“I love you, baby. But I want to see this dance of theirs happen.”

“Do it, do it, do it!” the group quietly cheered, and I was grateful that the rest of the bar didn’t chime in.

I held up my hand, and Clay sighed before knocking a shot of tequila back and putting his hand in mine.

“Fine. One dance. And then you stop asking.”

“I can’t promise anything.”

Clay rolled his eyes and let go of my hand before we walked out onto the dance floor. The music was decently loud with a good rhythm, and people were dancing and enjoying themselves. We weren’t a western country bar, but we weren’t a techno bar, either. We were just your average neighborhood bar that played anything people wanted. Right now, it was a familiar pop song, one with a good beat so you could get close if you wanted to or dance in your little box solo.

I looked up at Clay’s wide eyes, with his chestnut brown hair slowly falling in front of his face. I wanted to reach out like I once had and push it from his forehead, but I didn’t. Instead, I just moved to the beat, both of our hips shaking, and I knew others were watching. Because I didn’t go out on the dance floor like this. I worked. I worked my ass off.

Only here I was, dancing with the one man I shouldn’t.

People surrounded us, and I was grateful that the Montgomerys couldn’t see us from this vantage point. I moved forward and slid my finger along Clay’s belt loops.

Clay sighed and traced his finger along my shoulder before he twisted, and we moved to the beat. “It’s hard to say no to you, Riggs. Always has been.”

“And yet you said yes tonight.”

Clay met my gaze. “I don’t always have time to say yes, Riggs. It’s not about you, I promise.”

I swallowed hard, my neck going red with embarrassment. “There’s nothing quick about me wanting you, Clay. You know that.”

Clay met my gaze, his eyes moving back and forth, and I didn’t realize until it was almost too late that we were standing in a corner, hidden slightly by the wall, where no one could see us. Had he danced us over here? Or had I been the one to do it?

“The kids are at a babysitter’s tonight. With the other Montgomerys in Denver.”

I blinked. “Really?” I asked, knowing that Clay had his three cousins at home and was a single dad for all intents and purposes. He rarely had time off, let alone a night out. I hadn’t expected him to say anything to my proposition other than “hell no” and “go away.”

“I’m not closing the bar tonight. Rosie is.”

“Okay, then.” Clay leaned forward and bit down gently on my lip. I swallowed hard, wondering who the hell was propositioning whom here. “Just like before, then? No promises?” he asked.

I narrowed my gaze, knowing that my eyes had darkened, and my mouth had parted. “No promises.”

Even as I said it, I had to wonder exactly what I meant by that. 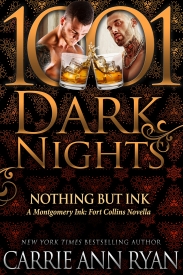