Passion Restored releases on Tuesday and I’m having my normal panic attacks. You’d think after 50 other releases I’d be ready, but I feel as though this is my first book all over again.

But first, a little background… 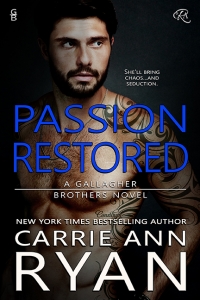 Let me tell you a bit about the book because I love this story so much. I’m PROUD of this book. And though I like all of my books, I do have ones that bring me out of my shell more or touch something deep. This was one of those books.

When I decided to write the Montgomery Ink series I knew it was going to be a big step. You see, I had already released ~30(?) paranormal romances at that point and people saw me as a shifter author. I wanted to write both and I didn’t want a new pen name. I didn’t want to deal with all the headaches of having two pen names. So I took a chance that you readers would love my words even if there weren’t paranormal elements in it.

So when I decided to create the Montgomery World, I knew it had to be big. It had to be a series were you could start wherever you want but there would be overlapping elements everywhere. I wanted one long series about a bunch of sexy inked bearded men with a bunch of offshoot series to tie in. Think of it like a tree if you will. I wanted the Montgomerys to be the big trunk and each branch to be a different spin off/area you could visit. But no matter where you climbed on the tree, you could still get to other places.

Hence my first spin off trilogy, the Gallagher Brothers. (There’ll be more branches to come in the future too!) It all started with the heroes of one of my Montgomery heroines. I knew going into the whole arc of Jake/Maya/Border in Ink Enduring, their romance was going to be a big on. I knew Maya was going to be loud and in charge and quite possibly, amazing–so her men had to be too. Border was the quiet one but Jake sang to me. How did Jake get to be the way he was?

From his family of course.

So I went into who his family was and how they connected not only to Jake and my Montgomery series, but their own family as well.

The Gallagher Brothers series is a set of stand alone books just like my other series. But with this one, each brother is on his own. He has his family to rely on if he has the faith to lean on them, but he’s going through this path on his own.

Graham had lost his family before he found his new happiness in the first book. Now it was time for Owen. Only Owen, unlike Murphy and Graham who’d gone through their own hells, seemed perfect from the outside. He’d been the one to watch his brothers fall apart as their lives twisted and turned, unable to help, but he’d been steady.

And that was why his book was so different for me. He wasn’t tortured because of what happened to him, but because he couldn’t do anything to stop the torment of those he loved. His whole being is about finding order and creating his own purpose, but he couldn’t find a way to help those he cared about. So Owen’s story for me started on the outside looking in.

It isn’t until he meets Liz under terrifying circumstances that things begin to go off kilter for himself.

Now Liz. Oh Liz. First off, I had no idea who Liz would be when I plotted out the series because I knew the Gallaghers, not who they would fall in love with. That’s not always a new thing to me as I tend to plot out the main family before finding out WHY an HEA will work for a certain couple. But Liz? She was a mystery to me. I knew her name and what she looked like because one of my dear friends asked me to write her into a book. But that was it.

Then I found out who she was and I broke a little as I wrote it.

This time Owen wouldn’t be forced to the sidelines when pain comes for them. He’d be right in the middle of it.

So this Tuesday I’ll be hiding under a blanket with chocolate and the idea for the third book, Hope Restored with Murphy and Tessa because I’m always so scared on release day.

But I couldn’t do it without you.

← Back to All News