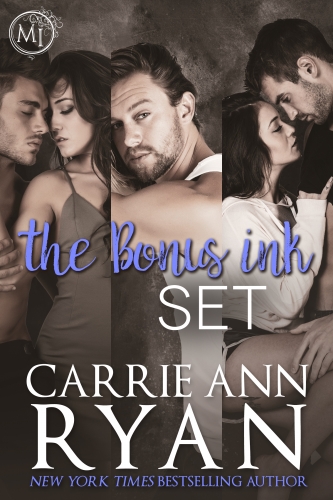 NYT Bestselling author Carrie Ann Ryan brings you three Montgomery Ink world romances that will tug at your heart and make your pulse pound. And because sometimes the romance is over at the end of the book, The Bonus Ink Box set includes seven additional short stories and deleted scenes from the Montgomery Ink World!

Ashlynn didn’t want him…she craved him. That was her first mistake, but not her last. She’s the boss of her life and decisions. She doesn’t have time for a bearded, inked man. But he may just make her yearn for it.

Jax thought it would only be for one night but now he wants more. She’s the straight-laced executive to his leather-and-jeans life, and she makes him desire more. She is so much more. But how much, he may never know.

Tattoo artist Brandon never thought he’d see her again. He’d trained himself never to think of her or what they’d had together. It was the only way he’d been able to survive but now she’s standing right in front of him and he can hardly breathe.

Lauren hadn’t known he’d be part of her plans until it was too late. She’d thought he was gone from her life and memories forever. Now he’s in her orbit once more and she’ll have to fight to remember the girl she once was and the woman she’s become.

Kaylee knows art, friendship, and love. And because she’s known love, she wants nothing to do with it ever again. She likes her life just the way it is. Her art and her Brushes with Lushes classes keep her sane and happy.

Landon spends his days with numbers and financial spreadsheets. At night, he just wants to relax, but the only way he can do that is with a woman. But these days, not just any woman will do.

Kaylee and Landon do an excellent job of dancing around each other, but no matter how much desire burns between them or their own personal hang-ups, they’ll need to make a choice: life as they know it, or a life that could be so much more. 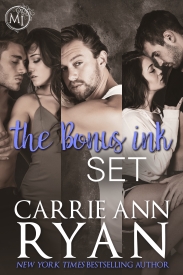