The 6th Stand Alone Romance in the Wilder Brothers!

This is Elliot, Trace, and Sidney’s book.

Sign up for ALERTS so you know all the good things! 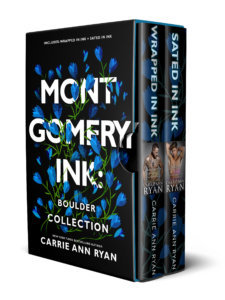 The Montgomerys are heading north to Boulder, Colorado. These Montgomerys hold their secrets close and their family closer…at least that’s what they’ve told themselves over the years. When their world shifts on its axis, however, each sibling will have to fight for a way to find their equilibrium, as well as who they thought they were before everything changed. Breaking down their own barriers won’t be easy, but they’re Montgomerys and never back down from a challenge—even when the challenges happen to be the ones they never saw coming.

Includes Wrapped in Ink and Sated in Ink 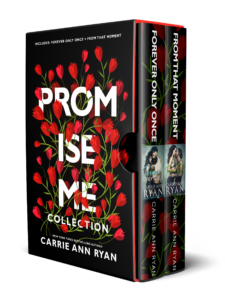 The first two full length romances in the Promise Me series:

The Promise Me series proves that dating isn’t easy, and dating while your friends and family are watching? Even worse.

When four friends decide to take dating into their own hands and set each other up on dates or just try to push one another in the right direction, things turn dangerous.

As the Brady brothers find themselves stuck in the middle of these plans—either by choice, happenstance, or accident—they have to get over their issues and secrets to either fall in line or run away as fast as humanly possible.

Mistaken identities, enemies they didn’t see coming, promises that were never meant to be kept, and a reunion no one wanted are just the beginning. 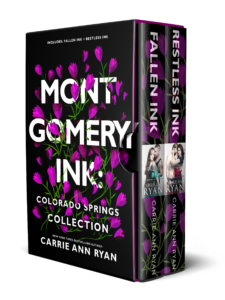 The Montgomerys are coming to Colorado Springs and they’re bringing their ink and angst with them. Three Montgomery sisters have watched their brother and eight of their cousins find their happy ever afters and want nothing to do with walking down the aisle and men who don’t understand what they want—in bed and out. Add in a brand new tattoo shop, family secrets, and a tragedy that no one was prepared for, the Montgomerys are ready to set the world by storm…or at least find a relationship that won’t break their hearts.

Page 1 of 181 2 3 4 Next ›
We use cookies on our website to give you the most relevant experience by remembering your preferences and repeat visits. By clicking “Accept”, you consent to the use of ALL the cookies. However you may visit Cookie Settings to provide a controlled consent.
Cookie settingsACCEPT
Re-Display Cookie Consent Bar→