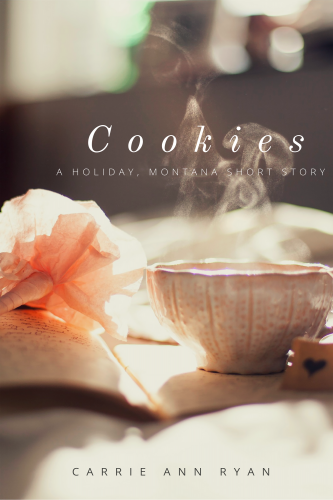 A special Holiday, Montana scene about Rina and Justin from Santa’s Executive. 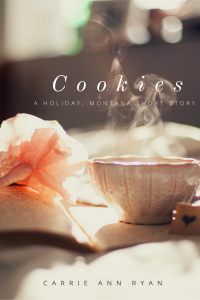 Justin glanced over at his very pregnant wife, Rina and grimaced. “You mean the frosted sugar cookies, don’t you? Because you ate the last of them and the grocery store is closed. I’d make them for you but we’re out of eggs.”

Rina looked over at him and he swore he saw a dark light in her eyes flash rather than the perky goodness that was her elf nature.

He had to be seeing things, though, since she was just pregnant and not spawning evil.

Just a pregnant wife who didn’t have her cookies.

Her one craving during this particular pregnancy.

She’d craved fudge when she’d been pregnant with Holly. This one? The thickly frosted soft sugar cookies that happened to be one of his weaknesses.

Rina was his other weakness.

“I’ll be fine without cookies. It’s okay, Justin. Thank you for caring.” She said the words sweetly and kissed his chin.

“I’ll uh…I’ll be right back. Just rest a bit and give me an hour. Is that okay?”

She shrugged and waddled back to her seat.

Yep. He was doomed.

He quickly ran back toward Holly’s room, scooped her up from her place on the floor with her books, and made his way to the front door.

“Daddy? Where are we going?” Holly blinked up at him and he gave her a strained smile.

“To every Cooper family member I know in search of eggs.” Because he’d make Rina’s favorite cookies for her from scratch if he had to because there was no way he’d survive if he didn’t.

Okay, so it wasn’t that dire, but his wife was pregnant and he sure felt like it could be that dire.

He opened the door and found his sister-in-law Abby on the porch, a wide grin on her face and two grocery bags in her hands.

“I have eggs and the last sugar cookies from the store.” She winked. “I figured you might need them.”

Justin blinked. His family sure had changed since they’d found out magic was real. The fact Abby could sometimes scare the crap out of him? Well that was just one of the things. But since she had everything his wife could need for her craving, he pushed all thoughts of what the hell from his mind and leaned forward to kiss her cheek.

“Or, you know, Santa, since he stopped by when I was on the way to the store earlier and mentioned you might need it. And by the way? Since when was Santa a really hot lumbersexual? I feel as though I’ve missed something.”

Justin let out a laugh and moved back with Holly in his arms so Abby could walk inside. “You have no idea,” he said and Holly giggled.

He turned as Rina walked toward them, her smile wide. “I love the Cooper family. And not just because you give me cookies.”

He took the bags from Abby’s hands and set Holly down before going to Rina’s side and kissing her soundly.

“Aww, you say the weirdest things.”